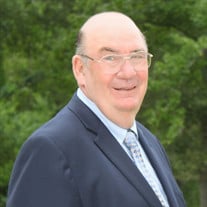 Richard E. Tanner of Bush passed away at his home surrounded by his family on Thursday, July 2, 2020. He was born on June 18, 1942 in Albany, GA to John W. Tanner and Edna Brumfield Tanner. He is survived by his beloved wife of 52 years Cheryl Spell Tanner; his daughters Mary Ann Galloway (Dale) and Jennifer Conley (Tony); and his grandchildren Robert “James” Lambert III, Reagan Galloway, Riley Galloway, Lance Conley, and Tanner Conley. He is also survived by sisters Julia Tanner Beyl, Claudia Tanner Allums, and mother in law Loureze Spell. Richard is preceded in death by his parents John and Edna Tanner, brothers Judge Thomas Tanner, Wendell Tanner, John Tanner, Steve Tanner, and sister Chloe Tanner Chandler. He is also preceded in death by his father in law A. V. “Tony” Spell. He was native of Georgia, grew up in Ponchatoula, and a resident of St. Tammany for over 55 years. He earned Bachelor of Science and Master of Science Degrees from LSU, and a Masters Degree plus 30 in Education from SLU. Richard began his teaching career in 1965 as a vocational agricultural teacher at Covington High School. He progressed to the Central office, where his roles included Supervisor of Child Welfare and Attendance, Director of Transportation, and retired as Assistant Superintendent of Administrative. He also served as interim Superintendent in 1986. He was elected Councilman at Large to St. Tammany Parish Council in 1979. In 2012, he was elected Councilman of District 6 where he served until his death. He also served as Council Chair in 2015. He served as General Manager, Vice President, and President of St. Tammany Parish Fair Association. In 1997, the St. Tammany Parish Fair was dedicated to him. Richard also served as President of the St. Tammany Parish 4-H FFA Youth Fund. Mr. Tanner was honored by the Bureau of Governmental Research, receiving the Keller Award for Outstanding Contribution to Efficient and Effective Operation of a Government Institution. He was a former member of Louisiana Highway Safety Commission. He was an avid supporter of Covington High School Athletics serving 5 years as President of the CHS Booster Club. Richard enjoyed being a devoted member to North Cross United Methodist Church. He was an avid LSU sports fan, and loved spending time with his grandchildren. Relatives and friends are invited to attend the Graveside services at Pinecrest Memorial Gardens Mausoleum adjacent to E.J. Fielding Funeral Home, 2260 W 21st Ave, Covington, LA 70433 on Monday, July 6, 2020 at 11:00 AM with visitation starting at 9:00 AM until service time. A wake will be held on July 5, 2020 at E. J. Fielding Funeral Home, 2260 W 21 Ave, Covington, LA beginning at 6:00 PM until 9:00 PM. Due to COVID-19, face masks and social distancing are required at all funeral services. In lieu of flowers, the family kindly request donations to: Richard E. Tanner Scholarship Fund, P.O. Box 1213, Covington, LA 70434. The Tanner family invites you to share thoughts, fond memories, and condolences online at E. J. Fielding Funeral Home Guest Book at www.ejfieldingfh.com.

Richard E. Tanner of Bush passed away at his home surrounded by his family on Thursday, July 2, 2020. He was born on June 18, 1942 in Albany, GA to John W. Tanner and Edna Brumfield Tanner. He is survived by his beloved wife of 52 years Cheryl... View Obituary & Service Information

The family of Richard E Tanner created this Life Tributes page to make it easy to share your memories.

Richard E. Tanner of Bush passed away at his home surrounded...

Send flowers to the Tanner family.