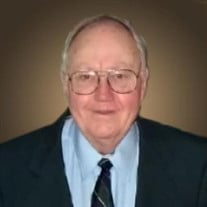 John Catlett Christian Jr., a long time Louisiana resident, passed away peacefully on June 30, 2020 at 91 years of age. He was born September 12, 1929 in Springfield, Missouri, the son of John Catlett Christian, Sr. and Alice Odelle Milling Christian. He is survived by his wife of 67 years, Peggy Jeanne Cain and their children John Catlett, III, and Alice Christian Long and her husband Andrew F. Long. John was blessed with three granddaughters; Charlotte Christian Castejon, Catherine Catlett Christian and Camille Corinne Christian. He is preceded in death by his parents John Catlett Christian Sr., and Alice Odelle Milling Christian, daughter Cathleen Marie Christian, and his sister Odelle Christian Beavers. John attended Greenwood School in Springfield, Missouri, then Sewanee Military Academy in Sewanee, Tennessee. He graduated from Drury College and Tulane University School of Law, where he served as a member of the Board of Editors of the Tulane Law Review. He served two years in the United States Marine Corps, and one year in the Missouri National Guard. John was admitted to practice law before the bars of Louisiana, Missouri, US Supreme Court, the Federal Fifth Circuit Court of Appeals, and the US District Courts in Louisiana. He practiced law in Lake Charles, Shreveport, and New Orleans where he was a partner in the Milling Benson Woodward firm for over thirty years. John practiced law in both Federal and State courts, representing oil and gas companies in contract and well blowout cases and large landowners in condemnation and expropriation proceedings. He incorporated and managed several land holding corporations, and served on the Board of Directors of the Louisiana Landowners Association. He was a Fellow in the American College of Trial Lawyers and was recognized in the publication Who’s Who in America. John was a member of the Christ Episcopal Church, Covington where he enjoyed singing in the choir. In recent years John resided at Christwood Retirement Community. The Christian family invites you to share thoughts, fond memories, and condolences online at E. J. Fielding Funeral Home Guest Book at www.ejfieldingfh.com.

The family of John Catlett Christian Jr created this Life Tributes page to make it easy to share your memories.

Send flowers to the Christian family.