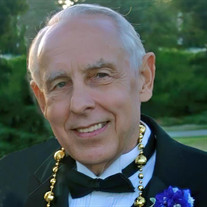 James “Jim” Daniel Cole passed from this life and into the arms of Jesus on December 29, 2021, at the age of 80 in his home in Covington, Louisiana. His deep Christian faith, perseverance and unfailing optimism even in the face of life’s challenges taught his children that the ups and downs of life can be met with both strength and a smile. Jim was a hero to his family, a generous and kind friend, an extraordinary man and a beloved husband, father, grandfather, and friend. Jim was born in Orange, California in 1941. Even from his early years, he was an incredibly hard worker and showed remarkable aptitude academically and athletically. He played and lettered in several sports, but his favorite was always basketball. Jim proudly served in the Army’s 3rd U.S. Infantry Regiment, traditionally known as “The Old Guard” at Arlington National Cemetery and at the White House in Washington D.C. Upon completion of his service to his country, Jim returned to Southern California, where he earned with distinction his bachelor’s and MBA from California State University Fullerton. This is where he met and married the love of his life, his wife of 56 years, JoAnne (Gause) Cole. Jim and JoAnne started their family in Fullerton, California, where their daughters, Allyson and Kimberly, were born. During this time, Jim’s career began to prosper. After a rapid ascent into management at Beckman Instruments, other companies began to take notice of Jim’s uncanny ability to lead teams, find strategic financial solutions, and think creatively regardless of the industry. In the 1970s, Jim was hired as Newpark Resources President and CEO, which brought the family to the Gulf South region where the family grew with the addition of daughters, Kristie and Jaimee. Jim worked successfully to bring Newpark to the New York Stock Exchange, and spearheaded several innovative technological solutions and the international expansion of the company. After retiring in 2006, Jim remained active in his community, church and several faith based organizations. He enjoyed participating in men’s Bible studies and a wide variety of ministries, including Desire Street Ministries which was very close to his heart. His family fondly remembers a husband and father who would run marathons with his running buddies, leave work early to help coach his daughters’ volleyball practices, and faithfully serve in his church. Access to a quality Christian education was a core value to both Jim and JoAnne, which led to their commitment to grow and serve Northlake Christian School. Jim’s vast experience in both business and life allowed him to mentor many in their own journeys. Jim never met a stranger and genuinely cared about other people. He loved a good joke and had many wonderful stories which his family and friends treasured. He is survived by many family and friends who will miss him dearly, including but not limited to his wife, JoAnne; his daughters, Allyson Cole, Kimberly Cole, Kristie Akl (husband Nick), and Jaimee Roberts (husband Michael), as well as his 13 grandchildren whom he cherished. He is preceded in death by his parents, Arthur and Elva Cole and his sisters, Jean Cole and Betty Lane. A celebration of Jim’s life was held on Friday, January 7, 2022. In lieu of flowers, the family requests that a donation be made to Northlake Christian School at https://northlakechristian.org/giving.html or Desire Street Ministries at https://desirestreet.org

James &#8220;Jim&#8221; Daniel Cole passed from this life and into the arms of Jesus on December 29, 2021, at the age of 80 in his home in Covington, Louisiana. His deep Christian faith, perseverance and unfailing optimism even in the face... View Obituary & Service Information

The family of James "Jim" Daniel Cole created this Life Tributes page to make it easy to share your memories.

James “Jim” Daniel Cole passed from this life and into the arms...

Send flowers to the Cole family.