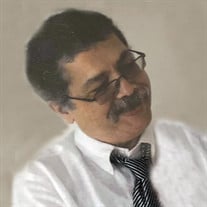 Gerardo “Jerry” Perez Jr. passed away peacefully after a short illness on Sunday, December 12, 2021 in Covington, LA at the age of 67. Jerry was born in Mayaguez, Puerto Rico on July 7, 1954 to Gerardo Perez Sr. and Maria Eugenia Perez (nee Santiago). Jerry “Pops” is survived by his son, Kenneth Perez and daughter, Brandeis Perez, both of Louisiana. step-children, Braithe Nash (Joe) (nee Landry), Virginia and Miles Landry (Tara) of Florida, brothers Carlos Perez (Irene) and Jose Perez (Kay) of Wisconsin; and 12 grandchildren. Jerry is preceded in death by his parents; brothers William Perez and Danny Perez, all from Wisconsin, and his wife, Lenda Dean Perez of Louisiana. His life without Lenda was never the same. Jerry attended Marquette University High School, Milwaukee, WI. He went on to graduate from University of Wisconsin, Madison Law School in 1978. Upon his graduation(s) he joined the U.S. Navy, as Lieutenant Judge Advocate. He was stationed in the Philippines and Guam. He then became a lawyer for the Social Security Administration based in New Orleans, LA. In 2009 he was appointed as a Federal Judge in San Juan, Puerto Rico until 2012, then served in New Orleans until his retirement in 2020. Jerry was an avid movie buff and was able to remember many quotes from all of them he watched. He was also a comic book collector from his days as a young boy. He loved the Green Bay Packers and Milwaukee Bucks! After retirement he enjoyed having a daily donut and cup of coffee from the Donut King. He loved to visit Milwaukee to see his boyhood friend and fellow lawyer, Robert Dwyer. Memories for all of his friends will be the sunny days he loved to sit on his front porch with a cup of coffee, a newspaper and smoking his favorite cigars. Relatives and friends are invited to the Funeral Service at E.J. Fielding Funeral Home, 2260 W. 21st Avenue, Covington, LA 70433 on Monday, December 20, 2021 at 3:00 PM with visitation from 1:00 PM until service time. E. J. Fielding Funeral Home has been entrusted with the arrangements. The family invites you to share thoughts, fond memories, and condolences online at E. J. Fielding Funeral Home Guest Book at www.ejfieldingfh.com.

The family of Gerardo "Jerry" Perez Jr. created this Life Tributes page to make it easy to share your memories.

Gerardo “Jerry” Perez Jr. passed away peacefully after a short...

Send flowers to the Perez family.