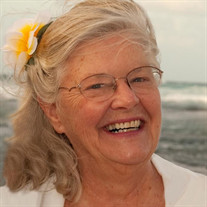 Ann Marie Pastuszek (nee McSweeney), a long-time resident of St. Tammany Parish who recently retired to Miramar Beach, FL, passed away on May 18, 2015 at Sacred Heart Hospital in Pensacola, FL. Born on February 29, 1944 (she’d be the first to tell you being born on February 29th meant she had really only enjoyed 17 birthdays) in Philadelphia, PA. Ann was a graduate of Notre Dame High School in suburban Philadelphia. On New Year’s Eve, 1966 Ann was married to her beloved husband, Harry P. Pastuszek, Jr. – whom she had met over a decade earlier when both were sixth graders. Ann and Harry embarked on a life’s journey that ultimately established them both as proud and active Northshore residents. Over the course of their 48 years of marriage, Ann served as the foundation not only for her family but also for Harry’s legal career – ultimately managing the office for Pastuszek and Associates in Covington. In addition, for the past decade Ann has been a leader in the St. Tammany chapter of the National Alliance on Mental Illness (NAMI), working to address issues confronting the mentally ill and their loved ones. Ann is survived by her husband Harry, Jr., her sister Mary P. Wolff, her brothers Thomas J. and Dennis P. McSweeney and her three children – Harry, III and his wife Elizabeth; Joanna; and Irene Schmidbauer and her husband Eric. Her greatest joy in life was perhaps time spent caring for and enjoying her five grandchildren – Harrison, Hayden, and Hunter Pastuszek and Sam and Eliza Schmidbauer. Ann’s motherly love was felt beyond her children and grandchildren – first by her younger siblings and then later by her many nieces and nephews, most all of whom will forever think of Aunt Ann when they are on a beach anywhere. According to her wishes, Ann’s ashes were scattered in the Gulf of Mexico in front of the family beach house in Florida on May 22, 2015. Relatives and friends of the family are invited to attend a memorial visitation on the June 17, 2015 at E.J. Fielding Funeral Home, 2260 W. 21st Ave., Covington, LA 70433, from 6-9PM. Please share a memory on the Tribute Wall at www.ejfieldingfh.com. Gifts in memory of Ann can be made to NAMI St. Tammany at 23515 Hwy 190. Mandeville, LA 70448.

Ann Marie Pastuszek (nee McSweeney), a long-time resident of St. Tammany Parish who recently retired to Miramar Beach, FL, passed away on May 18, 2015 at Sacred Heart Hospital in Pensacola, FL. Born on February 29, 1944 (she&#8217;d be the... View Obituary & Service Information

The family of Ann Marie Pastuszek (nee McSweeney) created this Life Tributes page to make it easy to share your memories.

Send flowers to the Pastuszek family.