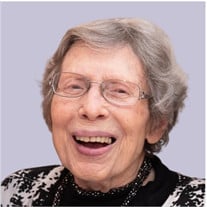 Alyce Marechal O’Brien passed away on Monday, January 10, 2022 in Covington, Louisiana at the age of 96. She was born in New Orleans on May 16, 1925 to Leandre Marechal and Carmen Valenzuela Marechal and was a resident of Covington for over 60 years. Alyce is survived by four children, Christine Lozes (Bill), Elizabeth McCormack, Michael O’Brien, and David O’Brien (Lillian); eight grandchildren, Wesley O’Brien, Christopher O’Brien, Andrew Preble, Maegan O’Brien Hyde, William Preble, Brian Lozes, Allison Lozes, and Sean O’Brien; five great-grandchildren, Sonia, Emmett, Alea, Jacob, and Nico O’Brien (plus two on the way); her brother, Paul Marechal (a Trappist monk known as Brother Elias); and son-in-law, John Preble. She is also survived by many other relatives, friends, and caretakers who were part of her extended family. Alyce was preceded in death by her parents; her husband, Charles O’Brien; daughter, Ann O’Brien; brother, Rene Marechal; and son-in-law, Noel McCormack. Alyce graduated with a BA from Newcomb College and was a phenomenal English and Spanish teacher at St. Scholastica Academy for over 30 years. She had a great love of life and infectious laugh and was a voracious reader and fabulous cook well into her 90s. We will all miss her terribly. In lieu of flowers, the family would prefer donations to the St. Scholastica Academy Scholarship Fund, 122 South Massachusetts St., Covington, LA 70433, https://www.ssacad.org/donate or the Monastery of the Holy Spirit, 2625 Highway 212 SW, Conyers, Georgia, https://www.trappist.net/support/donate. Services will be scheduled and announced at a later date. E. J. Fielding Funeral Home has been entrusted with the arrangements. The family invites you to share thoughts, fond memories, and condolences online at E. J. Fielding Funeral Home Guest Book at www.ejfieldingfh.com.

Alyce Marechal O&#8217;Brien passed away on Monday, January 10, 2022 in Covington, Louisiana at the age of 96. She was born in New Orleans on May 16, 1925 to Leandre Marechal and Carmen Valenzuela Marechal and was a resident of Covington for... View Obituary & Service Information

The family of Alyce Marechal O'Brien created this Life Tributes page to make it easy to share your memories.

Send flowers to the O'Brien family.